I’ve written, and re-written this post several times in the past month.  Originally this post was going to be about getting ready for my Half Ironman in Wilmington on the 13th….and then, Florence happened.  After Florence hit, the next few weeks were surrounded with wondering if the race would happen due to all the devastation in Wilmington.  I know how selfish it is to be worried about a race when so many people’s lives were turned upside down after the storm.  However I try to be transparent when I write and my reality is since January my world has been centered on training for this specific race.  I can’t count the number of times I’ve had to say no to friends wanting to hang out with the excuse, “I’m sorry but I have no social life until after October 13th.”  Six days a week I’ve been running, biking, swimming or some random combination of the two.

With all the time I have invested this past year to getting to the finish line next Saturday, I was really disheartened when the decision was posted last Thursday that Wilmington was cancelled.  Ironman gave the displaced athletes the option to defer to any remaining 2018 race or register for a 70.3 in 2019.  So, October 21st I’ll be racing the Half Ironman in New Orleans!

New Orleans is scary!   The time limit is shorter (8 hours to finish instead of the 8 and a half you have in Wilimington), the course is harder, the humidity is intense and the swim course is a lot harder thanks to choppy water and no current from the ocean to push you to the finish.  I am confident that I could have completed the Wilmington half in under 8.5 hours.  I am not nearly as confident that I’ll be able to do the same in NOLA.  I am still so so SLOW on the bike….so slow that during my tri last weekend I got passed by an EIGHTY year old woman on the bike (so serious).  I have crunched the numbers and know that I am dangerously close to the cut off time.  A DNF isn’t the end of the world, but I’d be lying if I said I wouldn’t be crushed to not be able to finish.

The past few months have been surrounded by Ironman training.  Now that I know what kind of work goes into training for a Half, I shudder to think about what next year will look like when I have my sights set on a full…..but, that is NEXT year, and right now my goal is to find the finish line without injuries and in under 7 hours and 59 minutes. 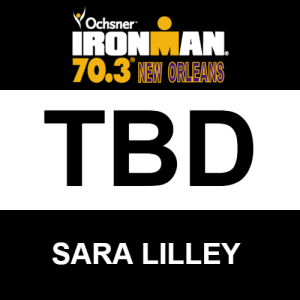