Ironman?  Me?  HAHAHAHAHA….no.  Heck no.  Not going to happen.  I can’t swim, I haven’t ridden a bike since middle school, and I’ve only run one marathon that was so awful I swore I’d never do another one. I’m just not strong/tough/fast/crazy (??) enough.  After seeing friends complete these crazy endurance events I repeatedly told myself there was no way I would ever be able to do an Ironman. Until, 2017 threw a curveball my way that showed me I am tough enough to do an Ironman, or anything else, I put my mind to.

January 16, 2017 was promising to be one of those days that every teacher looks forward to -a holiday, MLK Jr. Day, with no school!  I went to bed with the wonderful anticipation of not setting an alarm and having a fun day at home with no schedule or school work.  Instead, around 4am my stomach woke me up with some weird and strange pain on the left side.  I tried to convince myself that this was just a weird stomach bug, but when the tears started flowing that evening I knew I needed to go to the hospital.  A friend drove me to the ER and 5 hours later I was told there was a mass on my pancreas and I was going to be admitted to the hospital.

The next 4 days were a blur that was spent in the hospital undergoing multiple tests and trying not to think about the possibility of dying before my 30th birthday.  As dramatic as it sounds, I had done enough internet searching (side note – don’t do that if you’re sick!) to know that pancreatic cancer only has a 7% survival rate.  I left the hospital with a surgery date in two weeks and a lot of unknowns still lingering.  It was hard to wrap my mind around the fact that just a week ago I was healthy and obsessed with working out – and now I was on a very limited activity restriction with a planned surgery that would keep me out of school for at least 3 weeks and out of any exercise for 2 months.

The surgery was successful at removing the unwanted mass on my pancreas and spleen and ZERO cancer was found.  I spent the next week in the hospital on pain medicine with a new appreciation for how important the body’s core is.  It is relatively impossible to do any kind of movement without using your core; so to be able to use the bathroom I would have to call one of my parents for help (my parents = rockstars).  It is quite the humbling experience to go from being able to successfully scale an 8ft wall to needing help getting out of bed in a matter of weeks.

After 3 weeks at home to rest I was able to return back to school to see my kiddos and receive lots of “gentle side hugs” and return to a sense of normalcy.  Normalcy is definitely underrated; I didn’t realize how much I enjoy a typical day of teaching and working out until it was taken away.  I had taken two cycle classes at the gym, was finally released from my 15 pound weight limit and had attempted to start running again.  My body was finally starting to heal when I went in for a routine MRI to make sure all of my organs looked like they were behaving and I realized my medical saga was far from over.  The oncologist said that there was a fluid build up around my pancreas.  He referred me back to my GI doctor and I was scheduled for a procedure to place a stent in the central bile duct of my pancreas.

After another medical procedure was done and the hilarious high from the anesthesia (truly the best part) was worn off, I was sent back home.  The stent was supposed to be in place for 6 weeks to make sure the pancreas was healed and the fluid was gone.  Instead, about 5 hours later we were back on the way to the ER because I was in a lot of pain.  That lovely stent induced pancreatitis and I was in the hospital for 2 more days.  I was discharged around lunch.  My parents made the 3 hour drive home and life returned to “normal.”  Exactly 24 hours later I was lying on the couch reading a book when my pancreas started screaming and I experienced pain 10 times more intense than pain from surgery.  A friend helped me to my room, we packed my bag, called my parents, and set off for the ER….again.  On the way to the hospital the pain was so bad I was having trouble breathing and when my friend noticed my fingernails were turning blue she pulled into a parking lot and called 911.

According to Webster, pain is described as, “acute mental or emotional distress or suffering.”  According to me, pain is described as lying on the stretcher in the ER screaming and begging for pain medicine while trying not to puke on myself.  I can’t describe how intense the pain was.  I still have nightmares sometimes and relive those awful moments.  I spent 7 days in the hospital while doctors tried to figure out what was causing my body to shut down.  Evidently, the fluid was so infected around my pancreas it caused the stent to get clogged and get “stuck” in the central bile duct of my pancreas.  The fluid was increasing rapidly so I was sent to see a specialist, the only doctor in the state who could complete the procedure I needed, to have the stent removed and have new stents placed in my stomach.   About 6 weeks later my stents were removed and I was thrilled to find out the fluid buildup had been resolved.  In November 2017, I had a clean MRI which showed that the mass around my pancreas was not regrowing and I was happily told by my oncologist that I could “fire” him.

After spending most of last year sick, I have a new appreciation for a healthy body and the ability to live an active lifestyle.  It wasn’t very long ago that I thought I would never be able to complete a triathlon of any kind; much less try to complete an Ironman. The thought of 70.3 miles in October is scary and imagining 140.6 in 2019 is downright anxiety inducing, but I know there is nothing that Ironman training, or racing, can throw at me that could be more painful than what I went through last year.  So, Ironman – bring it on! I am coming for you! 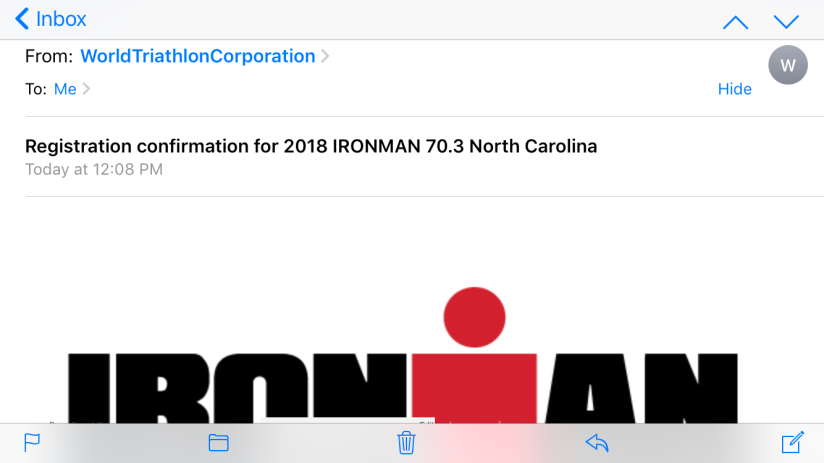 2 thoughts on “Overcoming my Pain(creas)”