Let’s talk about the phrase, “it’s just like riding a bike” and how it implies that once you learn to ride a bike you will always possess those skills.  Well, I am here to say – that is deceitful, misleading, and a LIE.  The allusive ability to be able to hop back on a bicycle after having not ridden one, and be able to ride seamlessly, is one that is not in my skill set.  I previously was among those disillusioned enough to believe that since I rode a bike as a kid; doing so as an adult would be “easy.”

Over the summer, I decided that if I was actually going to complete a tri I needed to buy a bike. I knew nothing about bikes except they have 2 wheels and are supposedly easy to ride.  I was told my old mountain bike that was hiding above my parent’s garage wasn’t going to cut it and I would definitely get laughed at if I tried to ride an old mountain bike at a triathlon.  Inspired by the fear of public humiliation, I walked into the nearest sporting goods store to buy a new bike.  After grumbling for a few minutes about their lack of pink bikes, I settled on a red and black (NC State colors – Go Pack!) bike that had good reviews and wasn’t so expensive that I felt like I was buying a small car. 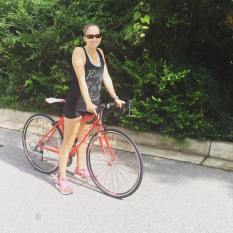 The beautiful thing about pictures is that they only show what we want them to.  In the above picture, you can’t tell that the previous night I was so excited that I hopped on the bike as soon as I got home.  You also can’t tell that that bike “ride” lasted about 7 seconds…7 very long seconds that included a few screams and an almost head on collision with a parked car.   Below are the texts that occurred shortly after with my friend who is crazy enough to take on this triathlon journey with me:

I’m proud to say that The Little Red Devil is slowly being tamed and I’m well on my way to being able to complete a tri this summer.  About a month ago I was told that an Ironman is, “A bike race, with a swim warm-up. and a run to cool down.”  I’m sure that everyone has a different opinion, but if that person was even close to being accurate – The Little Red Devil and I are going to become very close in the next few months!